Škrabl is located near the spa town of Rogaska Slatina in eastern Slovenia. Founded in 1990 by master organ builder Anton Škrabl, we design and build mechanical action and electro-mechanical pipe organs of the highest quality. We also restore and renovate organs of all types and sizes and carry out maintenance and servicing.

Our aim is to create instruments of distinctive personality and expressive power which, in sound and appearance, stand in harmony with their surroundings. In short, organs with soul.

Among our 70 employees, many of whom are musicians, are 30 qualified organ builders and our factory is among the best equipped in Europe, with sophisticated machinery and computerised design facilities. The scale of our operation, coupled with labour costs lower than those in most EU countries, enables us to quote competitively.

We have produced instruments for every part of the world, each designed to suit its location and purpose. After meetings with the client, full-size drawings are created and the organ is built to playing condition in our assembly room. The final voicing takes place at the destination.

Because of growing success beyond Slovenia, we have opened agencies in a number of countries to enable us to react speedily to the needs of our customers. Our representative in the UK, Richard Wood, who is highly experienced in all aspects of organ building, is based in West Yorkshire.

We take pride in the praise we receive from clients for the professionalism and quality of our work , but it is the response from organists that matters to us most. They are the ones who unite our product with their skill to create an unforgettable musical experience. 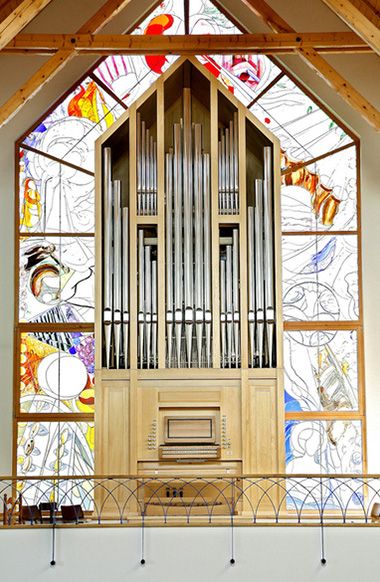 The 2006 Škrabl in the church of the Immaculate Conception, Kamnik, Slovenia.

Expaining the philosophy behind the unique sound of a Škrabl organ

Managing director ANTON ŠKRABL describes the sound of his organs as 'soft but bright and harmonious. He says:

"We always aim to match the sound to the space in which the organ stands. We visit the building and listen to the acoustic and we are not satisfied until the sound is perfect for the space for which it was designed. When I built my second organ in Slovenia, a famous organist came to play and his comment was 'the Skrabl organ is singing'."

Škrabl's UK representative, Richard Wood writes: The uniqueness of the Skrabl sound requires some explanation. Clients, organists and organ advisers are often amazed by the extraordinarily different and magical sounds created by Anton Skrabl. One adviser spoke of 'flutes with an amazing translucence and Principals which seem alive'. While it is not easy to generalise, the sounds has been created by an imaginative approach to tradition and a willingness to experiment with new techniques. Flutes, for example, have a substantially larger scale than usual and surprisingly low cut-ups. Most importantly, a metal stops are prepared using planed material produced in carefully regulated thicknesses to a prescribed formula unusual for most organ builders and almost unseen in England. Skrabl's planing machine of 2.5 metres in diameter is capable of regulating the thickness with an accuracy greater than 0.001mm.