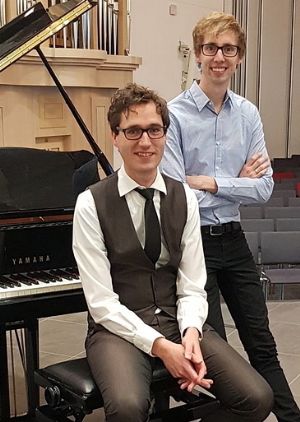 The young Dutch organist Gert van Hoef, whose YouTube videos reach huge audiences, has issued a recording of a concert played on a Skrabl organ in the Netherlands.

In it he combines with the pianist Wouter Harbers in a duet arrangement of Shostakovich's Second Waltz, Op 99a.

The concert was given earlier this year in De Fontein – the Fountain church – built in 2010 in the city of Nijkerk, south east of Amsterdam.

It has received glowing reviews: 'What a brilliant interpretation of this well known piece' wrote John Skill.

'What a delightful duet!  The balance between the two instruments was perfect,' wrote Kurt Sauer.