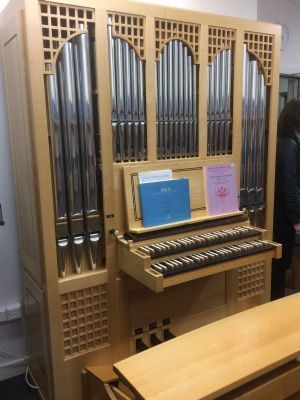 The organ is a rewarding instrument to play and any initiative that encourages more people to learn is to be commended.

So it is pleasing to learn of an Organ Taster Day for Pianists to be held at the Royal Hospital School Chapel, Holbrook, Suffolk.

It takes place on Saturday, September 14, from 11am – 6pm and is aimed at anyone interested in learning to play.

The day will be directed by the international concert organist Daniel Moult with David Poulter, formerly director of music at the Cathedrals of Liverpool, Chester and Coventry, and William Saunders, Director of Music at the school.

Among instruments on which participants will be taught is the two-manual Skrabl tracker action instrument in the Music Department library. There will also be an opportunity to play the four-manual Grand Organ in the1930s chapel.

The day will start with a recital by William Saunders and close with one by Daniel Moult.

Three workshops will cover: Basics – piano to organ, hymn playing, and playing pieces on manuals only and with an easy pedal part.

Specification of the Skrabl organ