Affordable practice organs for home or educational use are becoming increasingly popular among organists in the UK.

Practice, for example, is a daily necessity for two musicians in the north of England, both of whom ordered Skrabl instruments for their homes within a few days of each other.

One chose a four-stop organ with pedals and a special case. The other opted for a smaller, two-stop instrument.

Their instruments were installed within four months. Skrabl may be unique in being able to build finish and install such organs in under six months.

Each organ was built, with preliminary voicing, to the customer's specification in our workshop in Slovenia. They were then delivered and tonal finishing took place on site to suit the environment and requirements of each player.

When the organist of Lancaster Priory, Ian Pattinson BMus, FRCO, decided to replace his house organ, he turned to Skrabl. He says: "I was looking for a small two-manual and pedal pipe organ, primarily for practising on at home.

"Having had an electronic organ for many years, I wanted to have the obvious benefit of a pipe instrument with a sensitive mechanical action, in order to improve my technique particularly in the area of touch.

"I visited a Skrabl organ in a West Yorkshire residence, and was immediately impressed with the quality and style of voicing, the sensitive mechanical key action, as well as the variety of colours of registers available in a small space. I therefore chose to commission one almost identical to that, albeit with a more modern style of case and bench."

Mr Pattinson says the staff were helpful, friendly, professional and easy to work with during the different stages of the process and he was grateful that that the voicer was keen to ensure he was totally happy with the voicing and the temperament.

"After three weeks of practising on my new Skrabl organ, I have been able to get greater insight into the quality of my touch in my organ playing technique, and this has been a huge help to me, in music of any period; but the Skrabl organ has particularly inspired me with my Bach repertoire. 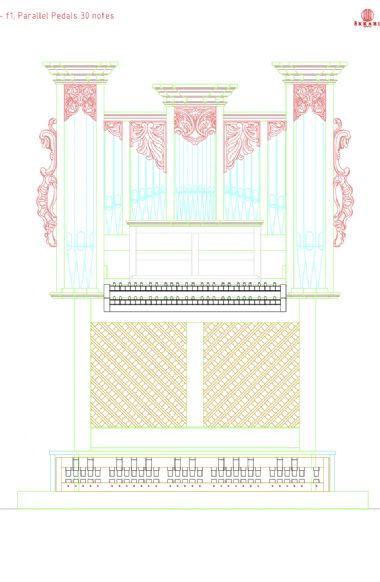