“The tremendous success of the many new and restored organs by Anton Škrabl in our Diocese is founded on a mature company that invests in apprenticeships, has artistic integrity, world-class voicing and above all engages in a genuine creative dialogue between builder, client and consultant.”

“In 2010 Škrabl were commissioned to overhaul the pipe organ and to install a new stop, at a cost of just over £100,000 + VAT. They dismantled the organ and took the parts requiring work to Slovenia. The process took about five months, and we were lent a replacement box organ in the meantime. We have been extremely satisfied with the whole process. The administration and payment was very straightforward, via Škrabl UK, who were helpful at all times.”

“My Škrabl house organ is a delight to eye and ear, and I couldn't maintain my playing without it.”

“The beautifully constructed Škrabl organ in the Parish Church of Lyme Regis has now been in service for four years. It has attracted widespread praise for its excellent tone, very skilfully matched to the rather dry acoustic of the building. The case, complete with pipe shades carved by a local craftsman, is also much admired and won a special award from the Diocesan Advisory Committee in 2011. From a musical point of view, the organ can perform music of all periods and nationalities convincingly.

Concert organists who have expressed their admiration for the instrument include David Briggs, Thomas Trotter, Philip Scriven and Margaret Phillips. The organ has also stimulated the founding of the Lyme Regis Organ School. This has a growing reputation for its annual winter residential course, plus weekly concerts in late summer and various workshops and demonstrations. The organ is increasingly used for individual tuition, providing an ideal teaching instrument with its sensitive mechanical key action.”

"I had the pleasure of the playing the organ at Holy Trinity Church in Westbury-on-Trym today. What a delight! I don't recall having played a Skrabl organ, so I was intrigued when I saw the name plate on the console. I could go on for hours describing my experience. It is certainly one of the best organs I've had the pleasure of playing, especially as it only boasts two manuals.

"My friend was also gobsmacked at the cathedral quality, from the delicate salicional to the solo trumpet. The pedal 16' bassoon is an excellent tool if you don't need the full force of that marvellous Bombarde. The organ is one of the best I've played in the UK, it all worked seamlessly.  I'm going to be researching other Skrabl instruments to arrange a session as this is my new fascination." 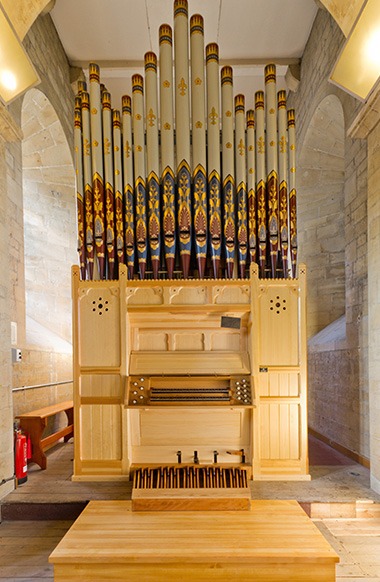 The organ in St Edward's, Clifford, near Wetherby, Yorkshire, restored and installed by Skrabl in 2011